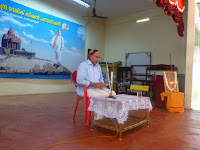 It was a good fortune to start our Vimarsha series with Acharya A.K.B Nair. Sri A.K.B Nair is a renowned exponent of spiritual literature in Kerala. After a long and spotless career in the Indian Revenue Service, he took up studies  in Sanskrit and Spiritual literature and emerged as an extremely well-versed speaker on Bhagavata,Devi Bhagavatam, Ramayana and so on.Of special interest to him is Ezhuthacchan's Adhyatma Ramayana in Malayalam.He has produced a well-studied commentary on this Malayalam Ramayana, which he says,the Holy Book of Keralites. The talk on 18th April, 4pm to 6.30p.m.was based on the innumerable anecdotes which make it a manual for self-unfoldment and societal well-being, in essence, it was an enlightening exploration into the Dharma as depicted in the life of  Maryadapurushottam Sri Ramachandra. One could easily understand why Sri Rama was called 'Vigrahavan Dharma'. How Rama behaved  as an  elder brother, as a husband, as a son, as a friend and as a K
Post a Comment
Read more
- April 19, 2016 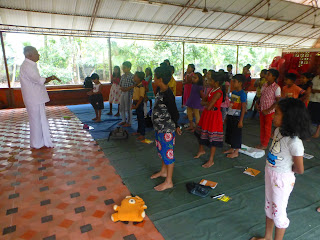 PDC- II A six-day nonresidential PDC for children of classes III to V was conducted at Anandadham from 13th April to 19th April. 40 children  enrolled. Story telling based on Indian Culture, our patriots , crafts including drawing ,painting and paperwork , games, Suryanamaskar and sanskrit sloka chantings formed part of everyday schedule. Today was the concluding session. Parents of the participants were invited for the session. Children were divided into 5 groups namely Dhruva, NAchiketa,Prahlad, Unniarcha and Abhimanyu. Smt Jyothi Unniraman, a close well wisher of Kendra was the Chief Guest.Guided by their group leaders who had attended the previous camp held for classes VI to IX , the campers put up a short and sweet programme which was well appreciated by all.
Post a Comment
Read more
- April 13, 2016 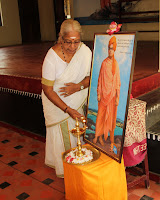 Personality Development Camp I PDC I started from  1st April and concluded in the  evening  of 7th April, (Thursday). The camp was formally inaugurated by Mananeeya Lakshmi Didi. The theme of this camp was " Make in India". 57 children from the age group of 11years  to 15 years, attended. Even though the duration was just a week, the children could enrich their capabilities, discover their potential through various activities meant for them during the camp. There were lectures on  i) personality development by a well-known professor Sri Harishankarji,ii) by Sri Mohan Nair, on the topic 'Belief' that what the human mind conceives , it can achieve, iii) on 'Memory power' by Sri Sudhakarji, iv)Sri Sujith Sir's workshop on values. Apart from this, craft classes taken by Su Bindu  and class on the importance of environmental conservation by Sri Anoop Sir, Suryanamaskar, games group songs and chants were also part of the schedule for the participants. M
1 comment
Read more
More posts