Upliftment of Indian womanhood – need of the hour

To transcend the multifarious problems and confusions that riddle the human mind resulting from the feeling of dualism, it is necessary that the mind be exposed to the advaitic Truth - awareness of ONENESS. Advaita is the crest jewel of human thought, which our great country has upheld from time immemorial. Unless and until we in India fully comprehend the significance of advaitic thought and its special relevance for the survival of our multicultural nation, we may also, like many a nation of the bygone eras, soon slip into oblivion. 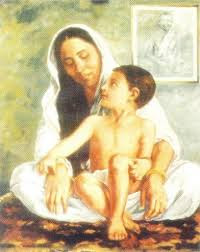 Matrudevo bhava’ is a mahamantra which contains within it a highly relevant, potent and practical message for universal peace and survival of mankind. For that very reason it is imperative that the strength and sanctity of motherhood be fully understood and made to manifest.

Is ‘advaita’ something ‘dry’ and ‘out of this world’ of day-to-day living? How can advaita be brought to inundate the multidimensional human feelings, emotions and transactions? If advaita is relevant as the Supreme Ultimate Truth, having nothing to do with human life, dry indeed it would be. But if it is allowed to descend from being mere knowledge in the brain, to cascade through and light up various human feelings and emotions, then something wonderful happens. Just as a seed soaked in water sprouts up putting up new leaves, just as a dry arid land touched by rain immediately gets covered with a green mantle of grass, just as a drying tree sprouts up all over again when watered so does the human mind gets enriched and enlivened, when the One Truth in the ‘advaita’ gets transformed into the ‘many’ in the human mind. Firmly rooted in Oneness, the human mind blossoms in the beauty of the diversity. In the treasure chest of the human mind there are any number of devices – emotions and feelings through which this wonderful transformation can be achieved. Like a musical instrument with many strings, mind can create an infinite variety of notes, unmake them and re-make them to create a harmonious orchestra of life if it so wills or vice versa. It is the awareness of advaitic truths that leads to harmony and peace. If this basic note is lacking only discordant notes emerge and such a life becomes filled with contradictions.

Standing on this pinnacle of advaita, how can this awareness of oneness be made part of the three main life-streams, Jnana Bhakti and Karma, making life extraordinarily rich and fulfilling! To understand this miracle God seems to have provided us with the glorious ideal of motherhood. In how many ways our Bharateeya culture has captured and expanded this ideal of motherhood! The Divine mother and her manifold bhavas as Lakshmi, Saraswati, Durga, Parvathy and other forms - each in essence indicating the rich potentialities and possibilities of the human mind, Mother Ganges, Veda Mata, Gita Mata, mother earth, this wonderful mother land of ours and so on - each one reveals the immense spiritual potential power and sanctity that lie hidden in motherhood. One can raise oneself to cosmic proportion meditating on this mystery of motherhood and its unfolding in infinite ways in this universe. To help us enter into the portals of such a meditation we have in front of us one’s own dear mother in whose milk we had the first taste of Life Universal.
Motherhood represents the principle of inter-relatedness, inter-connectedness and inter-dependence that hold together everything in the universe. The first unit of this phenomenon is our family. The ever fresh fountain of love that gives meaning and preserves family, as a unit is none other than the uncrowned queen of the house, the Mother. That is why we address Divine mother as Sri Maharajni, the empress of the Universe. Just as proton, neutron and electrons are held together by indefinable and invisible magnetic forces in an atom so do the various units of a home held in place without creating any disharmony by the magnetic power of love that the mother embodies. The power of that magnet lies in its extraordinary capacity to evolve ‘Oneness’ through love, sacrifice and service. These form the true nourishments for the children more than anything else. In its absence children wither away and their personality gets distorted. Unhappy homes are the breeding grounds for creating imbalanced men and women who in turn disturb the peace and harmony in the society.

When we explore the very origin of maternal instinct and the mysterious spiritual power behind, it will naturally take us to that ultimate primary cause of the universe, the Divine Mother Herself. SHE is the source and cause of all creation - the primeval energy - the primary cause, the Ultimate Truth. So is She the original source of motherliness - cause and effect relationship that we notice everywhere in the universe. Therefore when ‘Matruchetana’ is awakened in any one of us man or woman, there is a spark of the original transmutation of the ONE Truth into many. If one cares to meditate on this original instinct of motherhood and expand that ‘bindu’ into an all embracing feeling of love - awareness of inter relatedness - one can raise oneself to Universal Motherhood, to the status of Sri Mata. One need not be a mother in the worldly sense to achieve this, as motherliness is a spiritual awakening and elevation. In her gets embodied all that is best in creation - beauty (Lakshmi), knowledge (Saraswati) and action (Durga). All Godly powers are at her service. Such a mother is not only an adornment to her family but also a blessing to the society and the nation. She belongs to all. Diversities get merged in that ONENESS of motherhood and so do all problems based on duality wither away in her divine presence.

Such an expansive feeling of motherhood is very much needed in our society to rectify the mistakes that we are perpetrating in the name of caste, creed, religion, race and so on. All fanaticism, violence, terrorism etc. have their roots in the misguided notions of dividedness. To replace them with love, kindness and tolerance, the easiest way is the way of the mother. Manmade barriers can be broken down, sanity restored and peace created when true motherliness is made to manifest (be it in a woman or a man).

Unfortunately, majority of today’s women have lost this capacity for spiritual expansion. Materialistic hankerings distort her personality; disturb her innate qualities as mother, making her selfish, greedy, vengeful and blind. When children are exposed to this unnatural motherliness they fail to develop sustaining qualities in themselves. When the mothers at home spread unhappiness and bitterness slowly the whole society reflects that and peace and happiness disappear. On the other hand when true motherliness blossoms in a mother there is an expansion of personality and all petty feelings disappear.

Is it really possible for an ordinary woman to achieve such heights of perfection? Answer is yes. Our Puranas are full of stories of such exemplary mothers. In recent history we have the wonderful example of Holy Mother Sri Sarada Devi, inspired by whom Swami Vivekananda emphasised again and again the need to revive this Indian ideal of Motherhood for restoring the glory of our nation and to bring all round peace and well being.
article Womanhood
Location: Kodungallur, Kerala, India