On 12th January, Samuhika Surya namaskar competition was held for classes VII and VIII, at Bharatiya Vidya Bhavan's Vidya Mandir -Irinjalakuda.102children in five groups - Rose. Lily, Dahlia, Jasmine and Lotus groups, two from girls' and 3 from boys participated in the competition.From the boys, Dahlia group and from the girls Rose group were selected for the final on 28th January

On 14th January, Samuhika Surya namaskar competition was conducted for classes VII to X at Gurushree Public Scool, Chapara, Pullut.100 children in five groups -Kripa.Daya, Karuna, Adithya and Dharma groups, 3groups from girls and 2from boys participated in the competition.From the boys, Daya group and from the girls Adithya groups were selected for the final on 28th January. 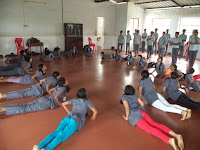 On 19th January, SamuhikaSurya Namaskar competition was conducted at S.N.Vidyabhavan, Chentrappinni. 40 students participated. All the 40 were selected for the finals as they had performed well.

25th January, Samuhika SuryaNamaskar competition at Bharatiya VidyaBhavan, Kodungallur, Sai Vidya Bhavan, P.Vemballur and AmritaVidyalayam, Kodungallur.80 children participated, from Bhavans and Amrita and 60 from Sai Vidya Bhavan, out of which 40 were selected, from each school. Groups selected from Bhavans were Nirvana (boys)and Nirvikalpa(girls), from Sai were Satya and Dharma and from Amrita Vidyalayam were Chinmayi and Jyotirmayi.

27th January, Samuhika Surya Namaskar competition was H.D.P.Y school, Andipilikavu.100 children participated out of which 40 were selected for the finals.

28th January, from morning 8 a.m up to 12 noon, the finals of the Groupwise Samuhik Surya Namaskar competition Surya Kiran, was conducted at Anandadham for all the students selected at the school level.8 schools participated. Sri Harilal of Arsha Yoga Centre and Sri Sudhakaranji, Kendra well-wisher were the judges. Sri Sai Vidya Bhavan's Dharma group for girls were the toppers, Gurushree Public School's Aditya group for girls and Bharatiya Vidya Bhavan's Dahlia group for boys secured the second and third position. In all during Surya Kiran Programme, 7100 Surya namaskars were performed by 880 students both at school and final level. 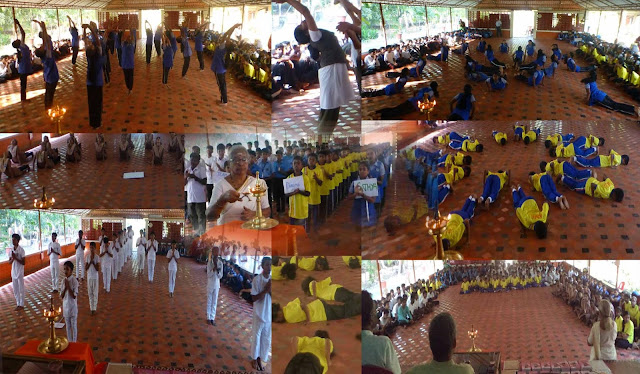 The Cultural Quiz for Students of CBSE Schools in Ernakulam was conducted at the Andhra Cultural Association Hall, Kochi on January 20th, 2016. The event started with the a short prayer followed by the lighting of the lamp by Man. Dr Lakshmi Didi. Didi also addressed the gathering.

SONG COMPETITIONS PATRIOTIC
AND FOLK, AT JUNIOR AND SENIOR LEVELS

Patriotic group song and Folk group song competitions were conducted on 21st for the Juniors(U.P.Leve) and on the 22nd for the seniors( High school level), at VKVVF campus, Anandadham. A total of eight schools and 200 students in all participated. Winners of Patriotic song at Junior level was Bharatiya Vidya Bhavan, Kodungallur and at the Senior level S.N.Vidya Bhavan, Chentrappinni. Winners of the folk group song competition at Junior level were Gurushree Public School- Chapara and at the Senior level, Govt.Boys H.S- Kodungallur. 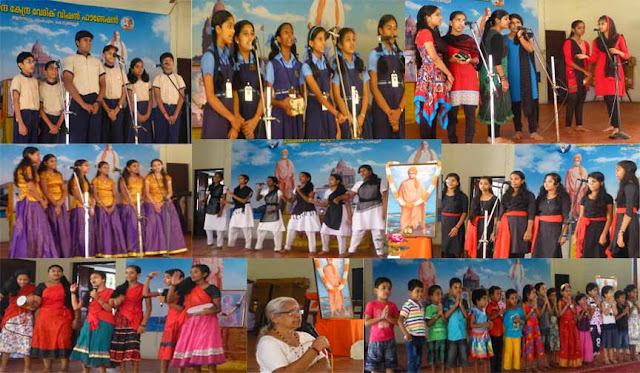 Flag hoisting by Mananeeya Lakshmi Didi.All Sishuvihar  present students and some old students along with their parents attended.Didi talked to them about patriotism in the words of Swamiji. A kutumba Sammelan was arranged for the day. Variety of games for the mothers, yoga students and children to take part and enjoy, followed by lunch together.Each of them cooked something special and brought for all to taste. All of them  enjoyed the essence and warmth
of being together. 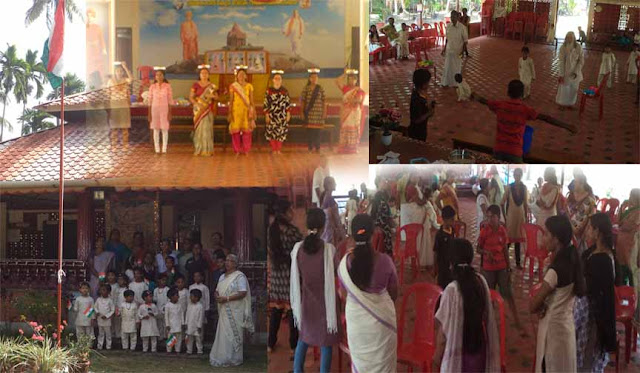 SEMINAR ON 'WOMEN OF INDIA - PAST, PRESENT AND FOR EVER' 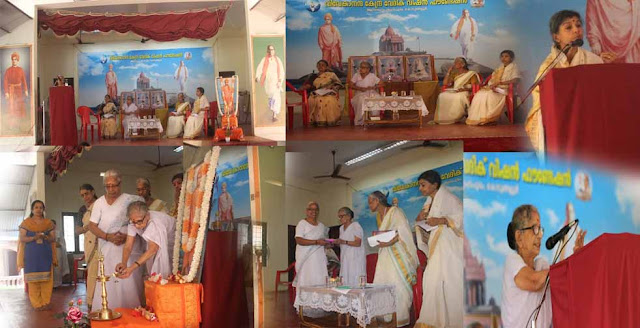 Public function of SV Jayanthi celebration was on 31st January, which was the actual Janma Tithi of Swami Vivekananda according to the Indian calendar. Programme started at 10 a.m and concluded at 12 noon. Prof.N.Lakshmi Kutty was the chief Guest and Prof Muralidharan, Director of Hindi Prachar Kendra delivered the Presidential speech.He emphasised on the importance of value-based education.

Prof.Lakshmi Kutty talked on the life of Swami Vivekananda, His extraordinary talents and qualities and how one could imbibe such qualities in one's life. Prize distribution followed. The rolling shield for Patriotic group song would be shared by both Bharatiya Vidya Bhavan, Kodungallur and S.N.Vidysbhsvan, Chentrappinni for six months in each school.Trophy of Folk group song would also be shared by Gurushree Public School and Govt.Girls H.S.S.Kodungallur. Mananeeya Lakshmi Didi and Prof.Lakshmi Kutty gave away the prizes. meritorious but economically backward students five each from the Xth  and XIIth  class of G.G.H.S.S.Kodungallur also received scholarships of five hundred rupees each and Kum.Arya of XIth  standard received the Late Sreedevi Namboodaripad Memorial Scholarship of Rs 1000/- for the being the topper in class. Sumptuous prasadam was served for all who had come. It was sponsored by a close wellwisher of VKVVF, Smt  Rema Murali of Irinjalakuda. 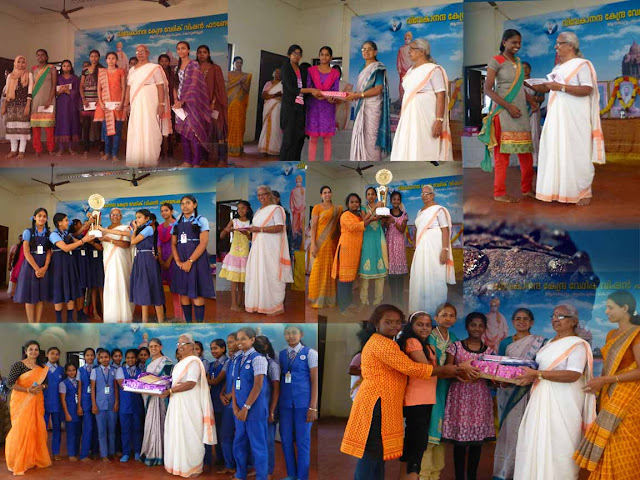