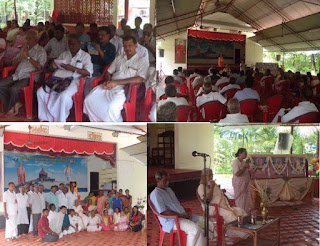 The baithak began with Bhajan Sandhya in the evening at 6.30pm. At 7.30 Su. Radha Didi welcomed all karyakartas and introduced Ma. Hanumantha Raoji, Ma.Lakshmi Didi and Ma.Sudhakarji. It was an informal session in which self-introduction of all the workers was  followed by a sharing of experiences by the Ma. Didi and other elders.