- April 04, 2018
With the start of Summer Vacation, there is demand from a different organization in and around Kodungallur, for PDCs or Atma-Vikas Shibirs to be conducted by Vivekananda Kendra. 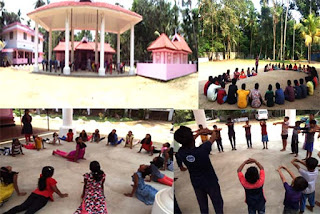 From 2nd April to 4th April a three-days non-residential Shibir was conducted in the Tripurasundari temple premises of Kovilakath Dharma Sabha, Edavilangu. Shibir started from 9 a.m.46 children from classes III to class X registered. Smt Padmaja, Yoga Varga member, conducted the Shibir. Sri Tarun from Mysore Kendra center and Kum.Drishya and Kum Anushree ( SamskarVarga leaders) together conducted games and Yoga classes.Professor Vijayalakshmi, a regular visitor of Swadhyaya class conducted the crafts class. Smt Padmaja told them stories on 'confidence ' and 'concentration' from the life of Swamiji and from Mahabharata. YCC students Smt Suja and Smt Sajitha spoke to the children on Personality development and  Indian Culture, on the first two days of the camp. On the concluding day, there was a drama competition based on the stories told in the last two days and a quiz on all the different things they had learned in the camp.

Mananeeya Lakshmi Didi and Smt Simji Ajithan(Ward Counceller) were invited as guests for the concluding function. The children put up a short sweet programme.Tokens of appreciation were given to each child by Didi.
PDC personality-development-camps shibir