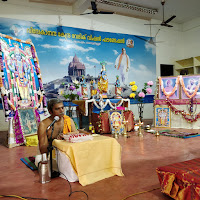 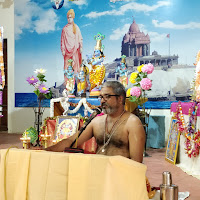 Seven days Bhagavata Saptaham started on 9th March with chanting and explanation of the Mahatmyam or the glory of Srimad Bhagavatam by the Acharya, Brahmasree Kurumballoor Hari Namboothiri. His assistants were Kunambilli Narayanan Namboothiri and Brahmasree Puzhalipuram Krishnan Namboothiri.


Ma. Didi's 83rd birthday was celebrated on 13th March with a sumptuous meal for all who had come to meet her and for those who were attending the Saptaham. 14th morning being our Ganapathi pratishtha divas, there was Ganapathi homam and Sree Chakra Puja apart from the usual Saptaha prabhashanam.

On the 16th it was the concluding day.All those who attended the saptaham were captivated by the lucid accounts of the 'puranic kathas' of Srimad Bhagavatam,narrated by the Acharya. 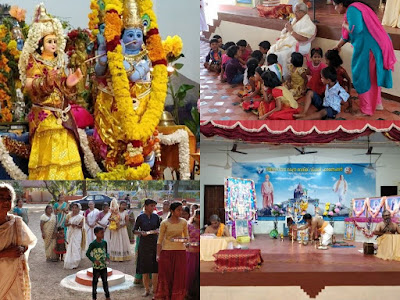