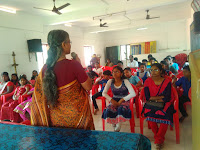 This time, the Kovilakath Dharmasabha members invited Vivekananda KendraVedic Vision to conduct a Shibir for children from class III to XI.
Accordingly, a three days non-residential shibir from 22nd April to 24th April was organized. This type of a shibir was held for the first time in Kovilakath. 40 children were enrolled. Dakshin Pranth Sanghatak, Su.Radha Didi was present for the inauguration as well as throughout the three days  Shibir. 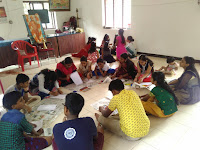 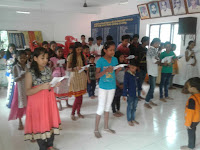 Children were divided into five groups according to their age, viz Sri Ramakrishna, Sri Sarada Devi, Sw.Vivekananda, Sister Nivedita, and Ma.Eknathji.Apart from the usual routine, one hour in the afternoon was planned for creativity class, where the small children were taught paper crafts and older ones made science models. 24th evening was the concluding day. Prior to the concluding programme, the parents and  Dharmasabha members' expressed their opinions about the camp. All agreed that a samskarvarga should start in Kovilakath so that the children of the neighbourhood would be benefited  .Ma. Lakshmi Didi was invited for the concluding programme. Didi urged the need for mothers to pass on the right type of samskaras to the children. The mothers' team at Kovilakath was a good one . 10 -15 mothers managed the vyavastha of the entire camp. They themselves cooked and served breakfast, lunch, and tea and created a vibrant and homely atmosphere. How true it is when we remember what Swami Vivekananda said that the real India could be seen in villages only! 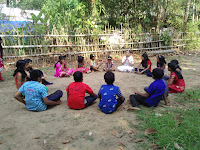 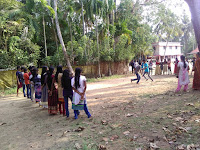 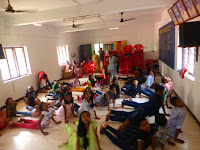 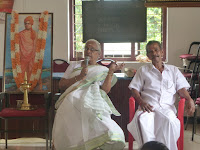 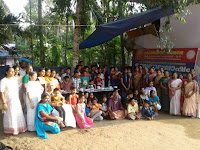