Anandadham. The children were asked to report on 4th evening by 4 pm which they did. When the children arrived the Swantanam program for the month was just about to begin so the children were asked to join the same. Man. Balakrishnan Ji, Vice President of Vivekananda Kendra addressed this session of Swantanam and the children were taken through a small talk on the Vivekananda Kendra’s Bharata Parikrama. Man. Balakrishnan Ji also recalled about his journey in life of serving in the challenging environment of IAF(Indian Air force) and then responding to Mananeeya Eknathji’s call and joining the Kendra as a Jeevanvrati.


Later the children settled down, refreshed and joined for the sandhya bhajan, followed by dinner. Post dinner the children were briefed on the schedule for the next 3 days. The focus of this camp was on creating working Science models and understanding the principles and functioning of the same. Some, time would also be devoted to building Math models and there will also be an outing.
Day 2, 5th May started at around 5 in the morning. At 5:30 everyone assembled for pratha smaran, followed by yoga that included couple of rounds of Surya Namaskar. A short break ensued for personal chores. By 8:30 everyone finished their breakfast and was ready to begin. Sushree Lalitha Didi had the first session explaining to the children the plan for the day. By 10:00 am.  Mananeeya 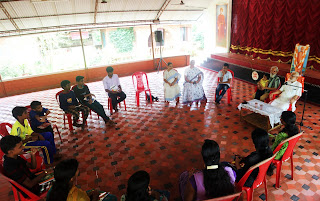 Balakrishnan Ji addressed the children; The power of discrimination resides in human’s only, and it helps us humans to decided what should be done and what not, it is important that in this wheel of birth and death, it is important for each of us to know the purposee of life. Use our knowledge to do good. What is good and bad, good is what is done keeping in mind the welfare of one and all, whereas bad deeds or where there is the selfish motive. The purpose of life is sevanam or service. So then the question that comes to mind is, don't animals  also do service; some animals give us milk, some help us in doing our chores, then how are humans different? Human’s have the power to differentiate between right and wrong, good and bad. 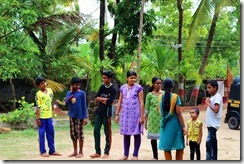 Day 3,  May 6th, was the day of outing. As usaul the day started at 5:00 am and after pratha smaran and short yoga session, everyone was ready to board the bus at 7:00 am.  Breakfast was picked on the way and had on the bus. Reached Archaeological Museum, Hill Palace, Thripunithura quite early much before the Museum had opened. Kerala's first heritage museum, is also the largest archaeological museum in Kerala. Once upon a time it was the Imperial Administrative offices and official residence of Cochin Maharaja, built in 1865, spread across 54 acres of land, and with 49 buildings. Photography is not allowed in the Museum, however the photographs that get recorded within each of us would not be erased for a very long time. There are 14 different categories of exhibits, including the crown and ornaments of the royal family. All found the exhibits extremely interesting, attractive, and some kindled the curiosity within. From the Hill Palace our next destination was Sri. Raghu Ji's house, where we had a sumptuous lunch. We thank Sri. Raghu Ji and Family for their kind hospitality, and wish them the very Best. We then visited the Museum of Kerala History, and went through the light and sound show on Kerala History. We also visited the Doll exhibition there. 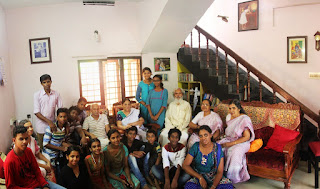 By then it was time to return, so started our journey back to Anandadham. Black clouds were building and we reached just in time before the huge downpour started. The day was long and tiring. The  sandhya bhajan was rejuvenating and post dinner it was time for review. The children could not control their excitement from their trip to the Hill Palace Museum and went on sharing their experiences of the day. And then it was time for lights out.
On 7th morning after the usual prayers, yoga and breakfast, Sushree Lalitha Didi briefed the children. Post this Adarneeya Lakshmi Didi addressed the children. She emphasized upon Swami Vivekananda's words "Each Soul is Potentially Divine,  The goal is to manifest this divinity by controlling nature, external and internal." She also stressed on the need for the goal in Life, and to ascertain the same very early in life. Didi related few key incidents from the life of Swamiji, incidents that paved the way and strengthened the focus to the Goal. Later the children went through the math modelling till lunch time. After lunch it was time to finish the science models and be ready for the demonstration during the closing session when the parents would also be present. 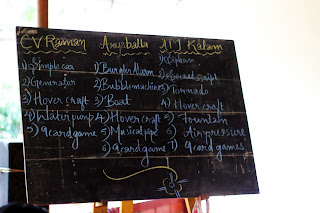