- May 01, 2018
The concluding day of every camp is a sea of emotions, amongst the hectic schedule of the day. May 1st 2018 was the concluding for this year's first Atma Vikas Shibir for children of class 7 to 9. After the morning Prarthana and Chantings, children got together into their respective groups to practice their drama. Some of the children were asked to express their anubhavam of the Shibir. One of the group leaders got into building the Shibir report. Apart from the respective drama's children also practiced patriotic songs(Hindi and Malayalam), and a small group practiced Yoga Asanas. Children also arranged their individual craft models. The concluding program was scheduled for 3:00 pm. After a sumptuous lunch it was time for the final rehearsals. 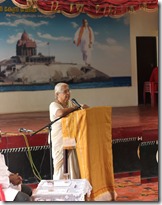 The master of ceremony was Kum. Athulyaputri. Ma. Lakshmi Didi welcomed the chief guest and parents to the event. She touched upon the impact of the camp on the overall development and thinking of each of the participants. She emphasized that if a participant consecutively attends the camp every year for couple of years it would develop in the individual a keen sense of deeper understanding of the self and their surroundings, thus nurturing an ideal family built on the foundation of our traditions and samskaras, consequently building a strong society and the world at large.
Deepa Prajwalan was done by Ma. Lakshmi Didi and Maj. Gen. Vivekanandan. The Maj. General in his address empha

sized upon important areas for the over all development of an individual. Be

ing a good listener is of primary importance, coupled with discipline. A self disciplined life that is not a result of fear but of love and respect. Man is a social being, hence it is vital to be able to work in teams and be a team player. Always give your 100% in anything and everything you do, said the Maj. General . Our text talk of Vasudeva Kutumbakam, the world is one large family and comprises of every living and non-living things, hence let us not forget it. It is important to conserve our natural resources and prevent ,misuse and pollution. The sharing mentality needs to be inculcated in every individual. Sharing is far greater and purer than donation! And all these means each of us have to be in the best of health. After all Health is Wealth. All these are the foundations of being a good citizen and wonderful Human Being.
Welcome speech was by Kum. Devapriya. This was followed by the reading of the Shibir report by Kum. Sreelakshmi. Kum. Averin, Nandana , Swathy, & Master Athmaj, Abhinav and Srihari shared their anubhavam of the weeklong Shibir.

There were four short plays performed by the children who had been divided in groups earlier. Swami Vivekanananda group showcased "The Fish Brother" a story focusing on forgiveness and love. The group Sri Ramakrishna enacted a play titled "Wounded Bird" which focused on living in harmony with nature and our surroundings. Ma. Sharada Devi group showcased a play "The Bear who helped the Farmer", again a wonderful theme focusing on the need to have harmony amongst all living beings and also touched upon upholding the "Value" system. Group "Sister Nivedita's" play titled "Accident" focused on the increasing "Digital Distractions" which is a rising concern amongst everyone. In between the plays there was rendering of Patriotic songs in Hindi and Malayalam. A wonderful and breathtaking display of Yoga Asana's was put forth by the children. Then it was time for the prize distribution followed by the vote of thanks by Kum. Vasudha.
The craft items prepared by the children during the Shibir was also displayed.