The second Atma-Vikas non-residential Shibir for the children of classes III to VI started from 3rd May and concluded on 8th May.
Mananeeya Lakshmi Didi inaugurated the Shibir. 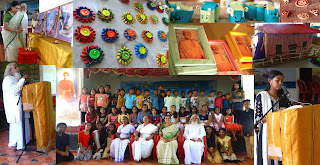 37 children from 9 different schools of                 Kodungallur and 2 children from                          Thiruvananthapuram participated. The daily schedule of the camp was from 9 am to 1 pm. Children were grouped into five after the five rivers of Punjab- Jhelum, Chenab, Ravi, Beas, and Sutlej. Each group had a group leader who was either a Samskarvarga leader or SKIE member. The day began with the teaching of Vedic chants, patriotic songs in Hindi and Malayalam. This was followed by a session on 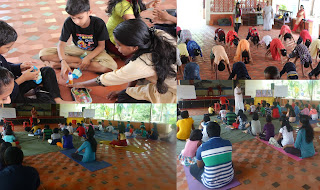 'Art of Storytelling'  which was the theme of this camp.
Sessions on creativity were conducted by the group leaders, Sri Amal and Kum Lakshmi. They taught the children how to create best from waste eg Candle -stands with pistachio shells, vases, caterpillars, dolls, table mats and 3D houses from newspapers and clay models from
' shilpakar'. Games and Suryanamaskar were taken by group leaders-Kum. Sreelakshmi and Kum. Anushree.
Classes on storytelling were conducted by Sri    Sudhakarji and  Sri Vasu Master, a dramatist from Perinjanam. On the fifth day, there was an interactive session on health and proper diet, by Dr. Arun, a neurologist by profession.
On the sixth day, a concluding programme was put up by the children. They had invited their parents for the concluding programme. A display of their creativity was arranged for their parents and the   Chief Guest to see. The Chief Guest was Smt Saraswathi teacher, Principal of Bharatiya Vidya Bhavan's Vidya Mandir, Kodungallur.The programme started at 12 noon and ended by 1 pm. The parents and the Chief Guest were thoroughly impressed by the short but sweet programme.
PDC shibir