ONLINE SWADHYAYA ON HATHA YOGA PRADIPIKA IN THE MONTH OF DECEMBER 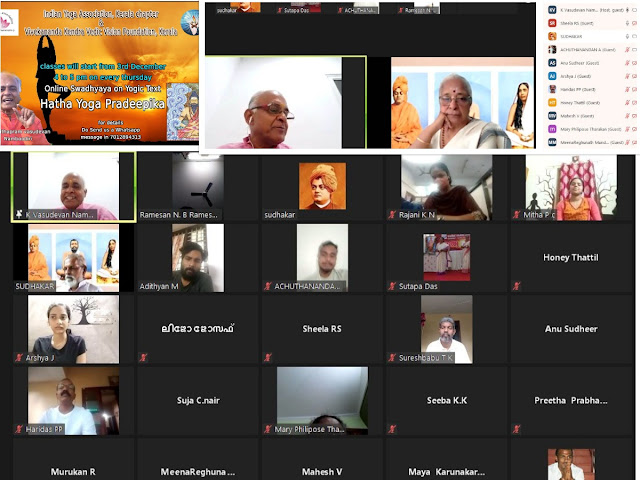 An online Swadhyaya class in Malayalam on Hatha yoga Pradipika by Acharya Kaithapram Vasudevan Namboothiri -Chairman of Patanjali Yoga research training centre, Ernakulum. 25  participants attended the class. MA.Lakshmi Didi welcomed the Acharya and Sri Sudhakarji introduced Acharya to the participants.
The wide knowledge of Acharya kept the participants spell bound.The Acharya began with the introduction of Hathayoga starting with 'Ha'-Hakara kirthita Suryaha and 'Tha' - Thakara chandra ucchate, again 'Ha' is prakriti and 'tha' is purusha  or 'Ha' is Ida and 'tha ' refers to  Pingala nadis  is Hathayoga.. Authored by Yogi Swatmarama who was the disciple of Gorakshanath.
Patiently explaining each and every sloka from Sanskrit to Malayalam during the month of December. From the 1st versr of prarthana sloka to 16 th verse deals with the disciplines required to become a Hatha yogiFrom the 17th and 18th verse deals with the introduction to asana and 19th  to the 30th verse which deals with asanas namely swastikasana, Gomukhasana,Veerasana,Koormasana, Kukkutasana,Uttanakoormasana,Dhanurasana, Matsyendrasana, Pascimattanasanaand Mayurasana and the method of performing with benefits of . some of the asanas.