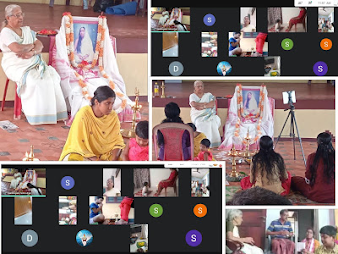 Samartha Bharat Parva started with state level online Gita chanting competitions for students from Classes I to VI. The 12th chapter of Bhagavad Gita was chosen for the competition. 80 students from 12 schools from all over Kerala participated. The concluding function was on Gita Jayanthi day on the 25th December with an hour long online programme.

Online Bhajan Sandhya was conducted on 30th December. 29 families took part. Mainly the youth of Kodungallur, who are either the relatives or those who are in samparka with the regular yoga varga karyakartas, participated in the hour long online Bhajan Sandhya held from 6.30 pm to 7.30pm. Matru puja was conducted on 3rd of January. 6 senior children actually performed the puja at Anandadham. The rest of the children mainly tiny tots of Sishuvihar and Samskarvarga children performed it online through Zoom meet. 14 families were present.

Online state level Solo patriotic songs was also conducted in  two categories.70 students from 10 schools  all over Kerala  registered and 46 of them participated. Each participant had to send the video of their song based on which the judges gave their remarks. 4 local yoga practitioners from Kodungallur and nearby areas, accompanied by the fulltime workers of VKVVF attended the Yoga Sastra Sangamam to enrich themselves in the yoga way of life. 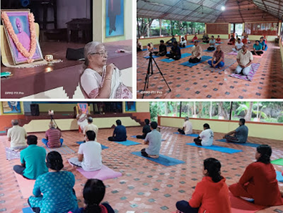 The Yoga Varga members of the morning batch were addressed by Ma. Lakshmi Didi who explained to them mentioning about the life and message of Swami Vivekananda about the need of the hour. Along with one's own mental, physical and spiritual health, one has to be aware about  the health of the society too. Then only one can call oneself as 'men with capital 'M'.  An online one and a half hour programme was arranged from 11 a.m. to 12.30. 50 people, including students who participated in the patriotic song competitions, along with and their family members, other local karyakartas and well-wishers were present. 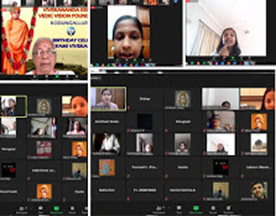 The programme started with invocation by local karyakartas Smt Anumol and Kum Lakshmi. Kum Drishya our Samskarvarga sikshak and her two little sisters sang a melodious song on Swami Vivekananda. Sri Sudhakarji welcomed all who were attending the programme, introduced Ma. Lakshmi Didi. The winners of the patriotic song competitions beautifully presented their songs. Ma. Didi in simple but powerful words introduced Swamiji and His message, his expectations from the students and youth of India. Smt Mridula Manoharan a very close well-wisher gave away the vote of thanks after the announcement of the prize winners. The first prize winner of category I (class V to VII) was Kum Purnima K Manoj of Bhavan's Vidya Mandir Elamkkara. Prize winners would receive their prizes through post and E- certificates would be sent to all the students who participated. Programme ended with shanti mantra.
ananda dham Anandadham patriotic songs samartha bharata parva vedic vision foundation kodungallur vivekananda jayanthi