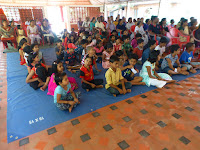 The five-day non- residential  Shibir for the small children, started from 29th April and continued until 3rd May.56 participants from the age group of 6 years to 13 years were enrolled. Children were divided into three groups after three rivers of Kerala - Periyar (classes UKG to III), Pamba (classes IV and V) and Nila ( classes VI and VII).Seven kayakartas formed the organizing team The youngest amongst the groups Kum.Avyaya lit the lamp and inaugurated the Shibir. 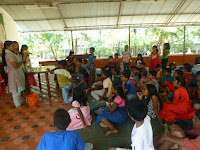 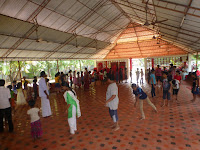 Vedic chants, Hindi and Sanskrit group songs taught by the members of the organizing team, stories and action songs by Sri Murali Master, creativity and making of science and Mathematics models by the young resource team of karyakartas of Anandadham, formed part of their camp schedule. Apart from that, Krida Yoga, Surya Namaskar, and Asanas, enacting in skits and understanding the science behind some very interesting science models of their level explained by the youngsters of the resource team made the Shibir a very interesting one.
It was a blessing to have  Ma.Balakrishnanji, all India Vice President of Vivekananda Kendra,  as Chief Guest for the concluding programme. 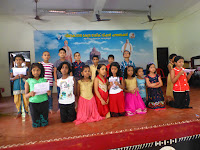 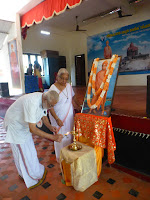 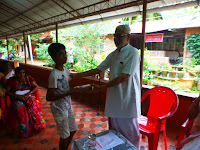