Commemorating the International Yoga Day, weeklong celebrations were organized this year from 17th June to 23rd June. In all nearly 2000 people took part.
From 17th to 19th in the forenoons, there were Yogasana competitions for the LP, UP and High school students. 50 students from 6 different schools participated.
In the evenings Samatva Yoga Sangamam were organized at 4 places namely Methala, Elthuruthu, Karumatra and Edavilangu. A close well-wisher and longtime associate of Kendra, Sri Premnathji Coordinated all these programmes guiding all the organsers.  900 people participated in these sangamams.
Each Samatva Yoga programme started with prayer, followed by welcome speech by the Yoga Varga Coordinator and address by Chief Guest, demonstration of yoga asana based on the National protocol by the local yoga varga members of that area and a few YCC and QCI students. Each Sangamam was arranged by the local Karyakartas and yogavarga members. The publicity for the Sangamams were done through house to house samparka and notice distribution. 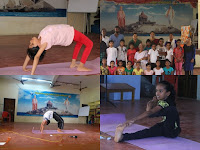 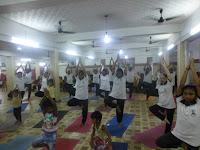 In the evening from 5pm to 7pm Samatva Yoga Sangamam was organised at Methala in the Sree Narayana Samajam Hall. Local popular poet Sri Muralidharan Anapuzha was the Chief Guest and keynote speaker. Karyakartas who organized this programme were Sri Girishji, Sri Nandakumarji and Sri Devdasji of Methala area. 45 practitioners demonstrated yoga while 50 people were present as the audience. Sri Nandakumar conducted the yoga demonstration.

18th June: Yogasana competition for UP school students was conducted from 7.30 am.  23 students from 5 schools participated. 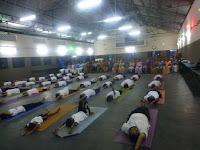 In the evening from 5pm to 7pm Samatva Yoga Sangamam was conducted at Elthuruthu in the Sree Vidyaprakashini Sabha Hall. Mananeeya Lakshmi Didi was the Chief Guest and keynote speaker. Prof. Kollikkathara Ravi, the President of the Samajam was also present on the dais. Karyakartas who organized this programme were Sri Joshiji and Smt Mani Sunil of Elthuruthu area. 200 people took part in the programme while 45 practitioners performed yoga together. Smt Mani conducted the yoga demonstration. 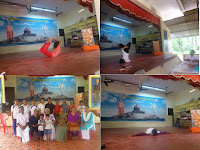 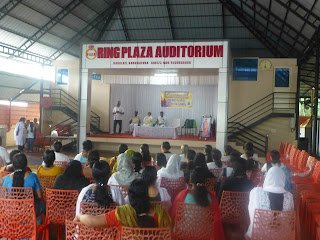 In the evening from 5pm to 7pm Samatva Yoga Sangamam was conducted at Karumatra in the Ring Plaza Auditorium. Sri Sivan Thanthrikal was invited as the Chief Guest and keynote speaker, Sri Natarajan, the Vice-President of SNDP was also present in the dais. Karyakartas who organized this programme were Smt Seeba, Smt Reshma and Smt Preetha of Karumatra area. 100 people witnessed the programme while 31 practitioners performed together. Smt Seeba conducted the yoga demonstration. 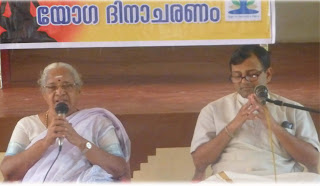 20th June: A swadhaya varga was started for the yoga practitioners from 3pm to 4.30 pm. Every Friday from 4pm to 5.30 pm would be the timing.  Topic is Patanjali Yoga sutras. Sanskrit scholar, Sri Narayan Acharya from Thrissur inaugurated the programme. The classes will be held four times a month. The Acharya would be conducting the class twice in a month and on the other days of the month, discussion among the yoga varga members on the sutras that were taken in previous session.

21st June: On the
International Yoga Day, Samatva Yoga Sangamam was conducted at Anandadham. 150 practioners were present for the programme at 6.30 am sharp. After Mananeeya Lakshmi Didi’s talk, they all performed Yogasana together in the Dakshina, Nivedita and Sarada Halls following the National Protocol. All of them at the end gathered at the Dakshina Hall for taking the Sankalpa. A light breakfast was served after the programme.

Apart from the above programme many of the Sthanik and poornakalin karyakartas got the opportunity to conduct a class or to address to students of various age groups.

No of Students: 150
Mananeeya Lakshmi Didi invited to speak on the occasion as Chief Guest 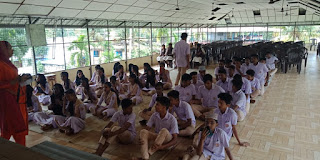 3) School: Seethi Sahib SS School Azhikode
No. of students who performed: 50
No of students, teachers, parents as audience: 200
In order to acquaint the students to the umpteen benefits of Yoga, The Excise department, Kodungallur branch organized a yoga awareness program on the occasion of International Yoga Day 2019 for the students of Seethi Sahib Memorial HSS, Azhikode on 21st June 2019. Smt Padmaja Suresh Babu and Smt Prajeela were invited on the occasion.

The program started at 9:30 am with prayer. The Excise inspector inaugurated the program followed by the welcome speech by Head Mistress of the school. The students were educated 'the importance and effectiveness of yoga in daily life' by Padmaja Sureshbabu, the Yoga instructor from Vivekananda Kendra, Kodungallur. The students were later also explained on how yoga helps in maintaining not only physical and mental health but also a healthy social life. This was followed by the demonstration done by Prajila Sreekumar, Sthanik karyakarta from Vivekananda Kendra on simple Yoga Asanas which are the most beneficial for starters. The session started with Surya Namaskar followed by a series of Asanas. The selected 50 students participated in the practical session of the program. The program went on till 12.00pm and then the vote of thanks was given by the principal and she appealed to the students to include yoga in their daily routine for its wholesome and salubrious effects on the mind, body and soul.
4) College: MES Asmabi College, P Vemballur:
No of Students: 100
This programme too was organised by the Central Excise Department, Kodungallur. Sri Padma Kumar, S.I of the unit. The NSS coordinator Smt Seeba welcomed the audience and introduced guest. The Principal Sri A. Mohammed inaugurated the program. Sri Padma Kumar initiated the proceedings of the day followed by a talk by Sri Sudhakarji (Prakalpa Sanghatak). Sudhakarji highlighted the role of yoga can play in the lives the college students and encouraged them to take yoga part of their lives. All children expressed desire to undergo ten day training, which Kendra promised to conduct the same.

9)    A Seminar on Shad Darshana was conducted by Kerala Vyapari Vyavasayi Ekopana Samithi, Perinjanam, where Mananeeya Didi was the main speaker.20 eminent people attended the seminar 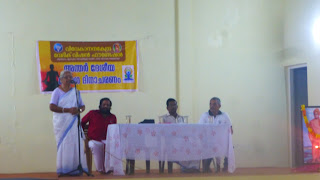 22nd June: In the evening from 5pm to 7pm Yoga Sangamam was conducted at Edavilangu in Sree Muruga Bhajana Mandapam in Sree Narayana Nagar, Edavilangu. Sri M.S Muralidharan, Director of the Hindi Prachar Kendra was the Chief Guest. Mananeeya Lakshmi Didi and the president of SNDP Edavilangu branch, Sri CK Pratapan   also spoke on the occasion. 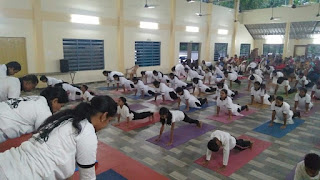 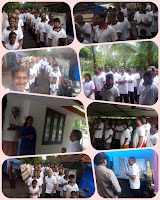 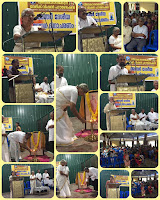 23rd June: After their usual yoga practice in the morning 30 yogavarga participants (ladies and gents) went on a bike rally to Elthuruthu village for Samparka. The villagers were invited for concluding program on the same day in the evening. 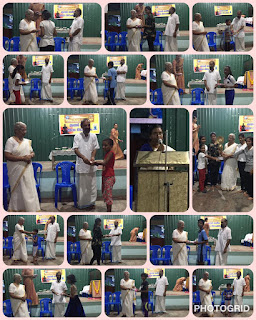 Sri Sudhakarji welcomed all who were present on the occasion. The Chief Guest spoke on the spiritual benefits of yogic way of life. Ma. Lakshmi Didi too spoke on the same lines quoting from the Bhagavad Gita and Kathopanishad. As she always adds, yoga is a technique adopted by one to uplift oneself. Maj.Gen Vivekanandan and Dr Panicker expressed their opinions about the benefits of yogic way of life through their own experiences. 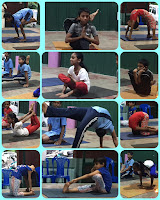 The prize winners of the asana competitions which were held for different categories of students, demonstrated on the stage gracefully many difficult advanced Asanas and left the audience spellbound. Prizes were awarded to the winners by the Chief Guest and Ma. Didi. The rolling Shield initiated in the name of Man. Eknathji went to HDPY Senior Secondary School. Vote of thanks was delivered by Smt Mridula Manoharan. The programme concluded with Shanti Mantra. 150 people attended.

Follow up:
1. Two Samskara Vargas at P Vemballur and Methala from the month of July.
2. Yoga satra of 15 days duration to be started at the Sabha Hall of Methala from 1st July. Total 15 people have registered.
3. Planning of yoga Satra at Sabha Hall of Elthuruthu involving Residents association, SNDP members and local villagers for a target total of 108 people who will be interested in learning.
4. Yoga Satra is being planned at MES Asmabi College. P.Vemballur.