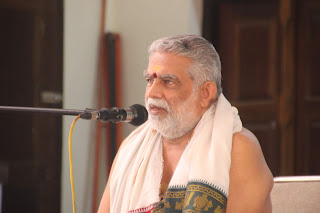 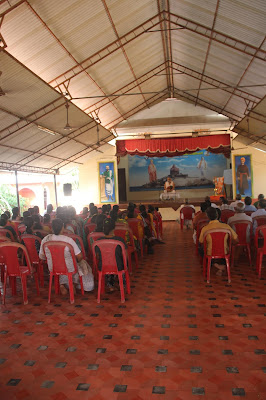 In our series of talks based on Sanatana Dharma on 16th June ( Sunday) the well known scholar, orator and sadhak and practising advocate   Sri T R Ramanathanji from Paravur, spoke about Satya and Dharma and their importance in Hinduism. He drew the attention of the listeners to the immaculate life of Sri Ramakrishna emphasising his sadhanas to realize the Ultimate Truth, how he realized from his childhood the uselessness of bread winning education and how his absolutely pure devotion to the Divine Mother , transformed  the idol, at Dakshineswar Temple into a living Truth which guided his life throughout.
He emphasised the old saying Shareeramadhyam khalu dharma sadhanam and how important it is to integrate body,mind and intellect to achieve the ultimate goal of God realization.He stressed the importance of acharas in upholding Dharma.In this connection he pointed out that Jitaasana, jitaswasa, jitendriya and jitasangha are of great relevance in achieving the goal.
India has upheld Satya and Dharma, the eternal values as the foundations of our culture and hence our country's civilization  has become as eternal as Truth. In no other country do we find such clinging to eternal values  and the result is all those civilizations have died a natural death while India still lives as a vibrant culture worthy of emulation by the whole world.40 participants attended
Satsanga Prabhashanam vkvvf