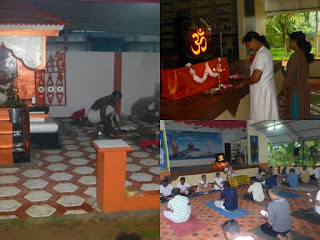 On the auspicious day of Guru Purnima, a few programmes were held at Anandadham and outside also.
Early morning there was Ganapathi Homam and Sri Chakra puja by Sri Shivan Thanthrikal and his assistant.

At 6 a.m to 6.30 a.m  there was the regular Yoga varga class.60 participants attended. After  the chanting of Guru Stotram,Ma. Didi while speaking  to the participants,stressed on the importance of this day. That on this auspicious day one should remember their first Guru -one's  biological Mother who is the greatest Karmayogi, then all those who have shown them the path to knowledge must be revered. She mentioned about Vyasa Maharshi the 'Vishaala buddhe' who enlightened the whole universe with his vast knowledge and who was born on this day.She also mentioned about Maharshi Patanjali who stressed on 'pranava' or 'Omkara' as the symbol of Ishwara.Pushparchana in front of the Omkara was performed by all the participants one by one while the 'Guru Paduka Stotram was being chanted. Programme concluded with Shanti Mantra and then prasada sponsored by one of the yogavarga members Sri Radhakrishnanji.

At 10.30 a.m Sandeepani Sishuvihar students, Nivedita Tailoring class students, YCC and YIC students and new participants willing to enroll themselves for the Yoga course, celebrated Gurupurnima Utsavam. Chanting of Guru Strotram in the lead and follow way, Didi's speech on significance of this day and pushparchana were the main items of the programme.It was mesmerising to listen to Ma.Lakshmi Didi who had to pass on he message of Gurupurnima toa mixed crowd consisting of tiny tots from 3 years onwards to the young , middle aged students and old people -the grand mothers and fathers of the tiny tots. She could amazingly engage the tiny tots to the elders with her enlightening message, enjoyed and grasped by all age groups.
7 tailoring students who got through their practical exams, received the pass certificates from Didi's hands.Also 4 of them out of the 7 received sewing machines.A total of 55 people including the tiny tots were present.

Evening at 3 p.m the Bhagavad Gita class group of 12 ladies of Methala area, celebrated Gurupurnima in their own way. Apart from chanting of Guru Stotram, Sri Sudhakarji spoke to them on the significance of the day. Pushparchana followed by Shanti mantra, concluded the one hour programme. 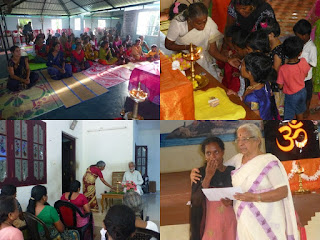 Smt Suja's (Saha Yoga varga Pramukh)  students from Kara, Edavilangu and Valsalyam around 42 of them , celebrated Gurupurnima at Kara Hall.Here too the  chanting of Guru Stotram,followed by a talk by Sri Sudhakarji.Importance of a Guru and significance of Gurupurnima was explained. The participants had brought from their homes , homemade delicacies which was served as prasadam after the Shanti mantra.