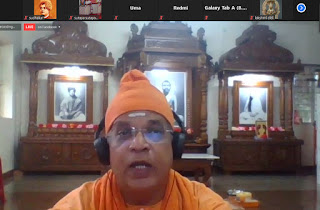 In the month of December only two classes were conducted by Swami Veerabhadranandaji. The two classes were on the subject
Character of a man reflects the character of the Nation.Swami Vivekananda was one such a person.
The topic of the two classes was 'Swamiji's response to Woman'
He referred to Swamiji's armour being the gift from his Guru Sri Ramakrishna to see the mother in every women.
Another cause of Swamiji's attitude towards women is how his mother Bhuvaneshwari Devi had trained Swamji as to how to treat the women.

One has to raise oneself up to the spiritual , aesthetic , ethical, moral aspect of one's personality  which can have higher and sublime By yields in one's life just like Swami Vivekananda, and which is the typical characteristic of  Indian culture . 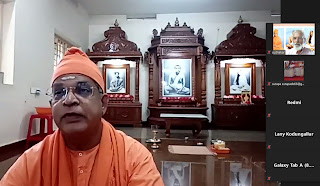 In the second session Swamiji made it clear how Isha bhakti and Desha bhakti or bifurcation of God and motherland was made one single unified force  by the concept  of Bhakti taught by Swami Vivekananda. When this two bhaktis get unified as was syncronised by Swamiji it turned into a patriotic urge , a practical Bhakti. Hence our motherland becomes God and her citizens the manifestations and naturally the theory of oneness with all automatically develops in one. This  idea of Swamiji was  taken up by all the freedom fighters. Even women of India had tremendous contribution to our National development. Swami Veerabhadranandaji  mentioned many incidents of most unusual sacrificing mothers of India  eg. that of Tamilnadu of Changorkan ( red eyed) Chola King  whose mother consciously  embraced death  to beget a son who would glorify the mother's name and  heredity. Swami Vivekananda's mother too performed penance before his birth. Thus Swamiji wanted that  every women be  approached as 'Tarini' or 'Yogini' or looking upon women with reverence rather than looking at her as a comodity or 'Mohini'.